Register Your Business or Login 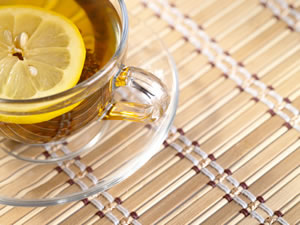 Thirty-eight men were assigned to one of two groups, and were asked to drink a bottle of oolong tea daily, containing either 22mg or 690mg of catechins. After twelve weeks the high catechin group showed a significant reduction in body mass index, waist circumference and body-fat mass compared with the low dose group.

Consumption of 3 or more cups of green tea a day was shown to reduce the risk of recurrence of breast cancer.

Women with a history of breast cancer who drank 5 cups of tea daily were 50% less likely to have a recurrence than women who drink none or less than 5 daily cups.

Men who drink at least 1 cup of green tea per week for 6 months have reduced risk of cancer of the colon, rectum or pancreas.

A compound found in green tea may be useful in fighting malignant tumors.

Green tea taken orally or applied directly to the skin has prevented damage from ultraviolet light, which can lead to skin cancer.

The risk of ovarian cancer declined both with the more tea they drank and the length of time they had been drinking tea.

Tea and the Heart

Drinking at least one cup of tea a day can reduce the risk of heart attack by 44%.

Drinkers of one or more cups of black tea a day are 40% less likely to suffer a heart attack.

Those who drank more than 6 cups per day of black tea had a more than 50% lower risk of coronary heart disease compared to tea abstainers, even after adjusting for other factors such as smoking, diet and obesity.

A study on the benefits of green tea consumption in preventing cardiovascular disease, liver disorders and possibly cancer.

Drinking at least one cup of tea a day can reduce the risk of heart attack by 44%.

Large quantities of black tea (more than 4.7 cups a day), and other foods containing flavonoids (fruit and vegetables), could help to reduce the risk of strokes.

Gallotannin, a substance found in green tea, is up to 100 times more powerful than comparable existing medicines in preventing brain damage after stroke.

Those who drink more than 3 cups of tea per day delay the age of developing PD by more than 7 years.

Coffee consumption was also investigated in this study and no protective effect was found. One suggestion is that it may be the free-radical scavenging phenolic compounds in tea exerting a neuroprotective effect.

Green tea taken orally or applied directly to the skin has prevented damage from ultraviolet light, which can lead to skin cancer.

An antioxidant found in green tea is at least 100 times more effective than vitamin C and 25 times better than vitamin E at protecting cells and their genetic material, DNA.